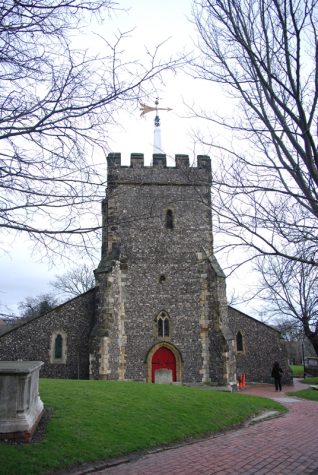 c) RECONSTRUCTION and ADDITIONS: Work on the enlargement commenced on 3 June 1853 under architect Richard Cromwell Carpenter; he virtually rebuilt the church such that only the pillars and arches of the nave, the chancel arch and screen, and the tower can now be considered to be genuinely fourteenth century. The galleries were removed, the aisles widened, and the north aisle was also lengthened, but when the church reopened on 8 April 1854 the number of sittings had actually been reduced to 900. Carpenter also designed the Wellington Memorial Cross, situated at the western end of the north aisle.
In 1872 a new organ was installed; it had not been possible to refit the original 1813 organ into position following the restoration. In 1877 the choir vestry and northern approach were added, and the reredos and panelling were installed around the sanctuary by George Somers Clarke. Clarke also added the north vestry and a clerestoried roof in 1892. The eastern end of the north aisle has since been consecrated as a war memorial, the Chapel of St George, while the south chapel has been restored as the Lady Chapel. The stained glass by Charles Kempe dates from around 1880, while on the south wall are two interesting tablets which record the charitable bequests to the poor of the parish. There are also memorial tablets to Dr Samuel Johnson and T.R.Kemp, and a list of incumbents. {58}