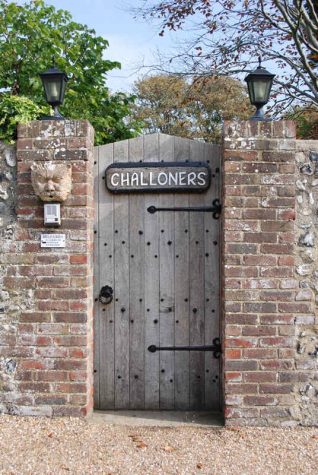 w) CHALLONERS: A large, listed house faced in knapped flint which may be glimpsed over the wall from the south-west. Formerly the manor house and farmhouse of Challoners or Manor Farm, this is the oldest house in Rottingdean and was acquired by Thomas Challoner in 1456, but only the cellars date from that time as it was altered at the end of the sixteenth century. The house was the property of the Beard family for nearly 300 years. The facade now dates from the early eighteenth century with additions of about 1805 including the five-sided glass porch. In the 1980s Challoners, which had been divided into three, was restored to a single house with all period features retained. Extensive passages from the cellars once ran all the way to the beach, but they were blocked many years ago. A mulberry tree in the garden, said to be the largest in the south of England, was planted during the reign of James II.