You are here: HomenextPlacesnextStreetsnextOld SteinenextName dates back to 16th century

Name dates back to 16th century 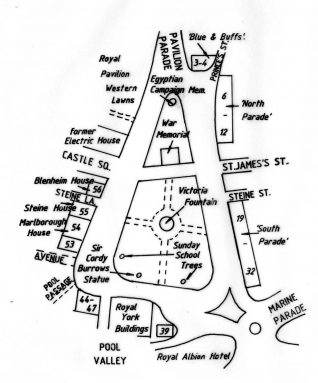 zoom
The Old Steine: click on image for a full sized view
Reproduced with permission from the Encyclopaedia of Brighton by Tim Carder, 1990

a) EARLY HISTORY: Known simply as ‘The Steine’ to locals, this natural focal point of the town became the Old Steine in the 1790s when the New Steine was developed on the East Cliff. The name has been used since at least the sixteenth century, and may well have been derived from a Flemish word meaning ‘stone’ as a number of large sarsen stones have been recovered from the area. For centuries it was an ill-drained area of grassland, devoid of trees, with the intermittent Wellesbourne flowing down the western side; indeed it was probably its swampy nature that prevented any development upon it. From time immemorial the fishermen of Brighton used the Steine for drying nets and storing boats in bad weather, and in 1665 it was said to extend beyond East Street to the cliff top and included a bowling-green. The area now occupied by the Victoria Gardens was also known as the North Steine. {10,15,289}

b) FASHIONABLE PROMENADE: The arrival of fashionable society in the latter eighteenth century brought considerable change to the Steine as it was the one area which could provide a flat, sheltered promenade for visitors. Dr Russell’s house faced the Steine on the southern side, and several large houses were erected along the western edge around 1770. In 1760 a Mr Baker opened the town’s first library on the eastern side of the Steine as it became the centre of the resort’s attractions. In 1776 the turf itself was improved and wooden railings were erected to enclose the grassland, much to the anger of the fishermen. The North and South Parades were erected along the eastern side in 1786, and the following year the Master of Ceremonies prohibited all ball-games on the grass.

The Steine was further improved in 1792-3 when the Prince of Wales  and the Duke of Marlborough constructed a sewer along the western side to channel the Wellesbourne and improve the drainage, thereby removing the stagnant pool that lay along the north-western edge in front of the Prince’s Marine Pavilion; the lords of the manor granted them a portion of the Steine to enclose in front of their houses in return. A brick path was constructed around the inside of the railings in 1806, and horses were prohibited in the winter in order to preserve the turf. A superb model of the area at around the turn of the nineteenth century may be found in the Royal Pavilion.

Two large hotels, the Royal York and the Albion , opened on the southern side in 1823 and 1826 respectively, still facing inland rather than towards the sea, but the pre-eminence of the Steine as a promenade declined following the opening of the King’s Road in 1822 and the Chain Pier in 1823.

On 8 September 1823 the town commissioners enclosed the Steine with iron fencing, but this was only after an extremely vociferous protest by the fishermen who were effectively prevented from making any further use of the Steine for drying nets and sheltering boats despite their claim of inalienable rights. Gas lighting was installed in May 1824, and in the same year the road along the southern side in front of the Royal York was constructed; in March 1834 the road across the centre was opened. Around the turn of the twentieth century a bandstand stood in the south-western corner of the gardens, which had been planted with trees in 1846. In 1921 the tall iron railings were replaced with the present dwarf fences.

Although it was the freehold property of the lords of the manor (which was proved in the case against the fishermen, who had anciently paid a rental), the Steine was always considered to be a public open space and this situation was formalised on 22 April 1822 when T.R.Kemp and the other landowners vested the Steine in trustees on behalf of the town. Under the terms of the 1873 Brighton Borough Extension Act, the powers of the trustees were vested in the borough council.
{2,3,14,15,33,48,126,170}