You are here: HomenextPlacesnextStreetsnextOld SteinenextThe Library, the Confectioner and the Black Cat

The Library, the Confectioner and the Black Cat

Not long after Dr. Richard Russell established a practice in Brighton commending his patrons to ‘take the waters’ for all manner of ailments, the first libraries made their debut in the town. It was perfectly natural that these establishments were situated on the Old Steine during the 1760s, close by to Russell’s house and the Old Brighton Manor house, known as Steine House. Russell’s house was replaced in 1823 by the  Royal Albion Hotel whilst the Royal York Hotel had replaced the Manor house a few years beforehand.

Standing between Russell’s house and the Manor house, a Mr. Woodgate had built his library, having been succeeded by Andrew Crawford around 1784. Shortly afterwards he rebuilt the premises and it was ostensibly this building which for many years stood in isolation, jutting out from the southern building line of the Old Steine, confusingly having been named Steine House. 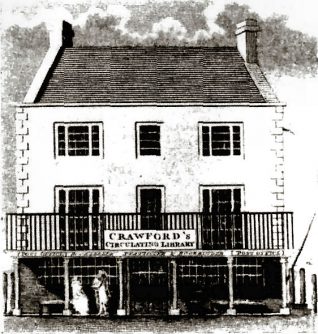 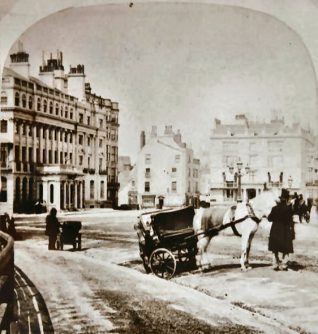 The building in question in the centre c1860

In the 1820’s Mary Crawford leased the building to George Phillips, who became Confectioner to the King. By the late 1830’s William Shaw had succeeded Phillips and divided the building into two, continuing his own business in one half as a Confectioner, with a Milliner occupying the other half. This building was numbered 39 and 39A, the Old Steine.

The building remained very much the same until the turn of the century. By the 1920’s it had been rebuilt as a car showroom, being first shown as occupied in 1925 by J. Carlish & Co., but by 1927 George Newman & Co had taken it over. Today it still stands incongruously placed between the Royal Albion Hotel and the Royal York Hotel, the previous features of the car showroom having cunningly been clad in a style mimicking an older building, save for the enigmatic ‘black cat’ remaining upon one corner.