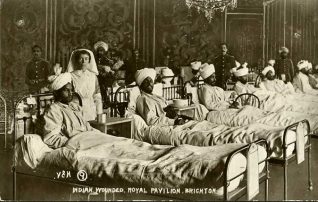 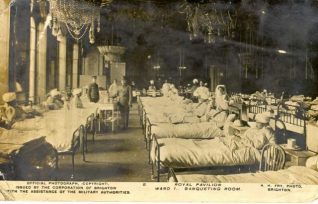 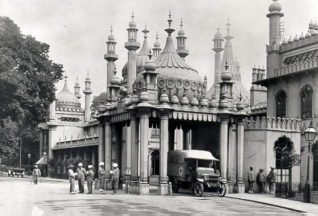 zoom
Groups of wounded Indian soldiers outside the hospital at the Royal Pavilion during the First World War.
Image reproduced with kind permission from Brighton and Hove in Pictures by Brighton and Hove City Council

e) FIRST WORLD WAR HOSPITAL: During the First World War the Royal Pavilion estate, including the Dome and Corn Exchange , was offered by the corporation for use as an Indian military hospital . A high wooden fence was erected around the grounds to protect patients from prying eyes, the first of whom were admitted on 1 December 1914, and by the time the last Indian was evacuated on 15 February 1916 a total of 4,306 patients had passed through the 724-bed hospital. From 20 April 1916 until 21 July 1919 the estate was given over to the Pavilion General Hospital (for limbless men) which received 6,085 admissions. The South Gate, and also the Chattri at Patcham , were later erected as memorials to the Indian dead and wounded. On 28 August 1920 the military released control of the Royal Pavilion and the public were admitted once again.