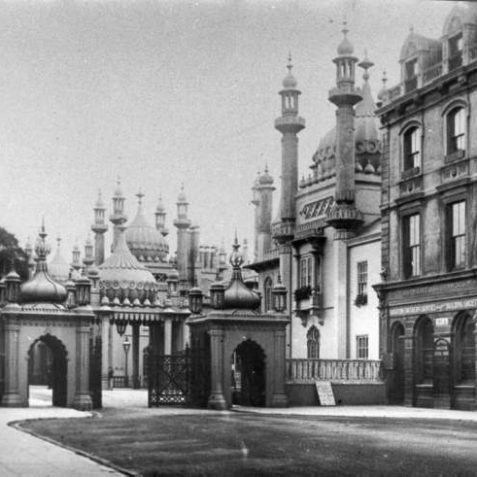 South Gate and Pavilion Buildings; built in 1851 to replace the original gate of 1831. There are two Mughal archways with cast iron umbrella-shaped domes (known as chattris) and a low iron gate between them. They were demolished in 1921 and replaced by the current Indian gateway.
Image reproduced with kind permission from Brighton and Hove in Pictures by Brighton and Hove City Council 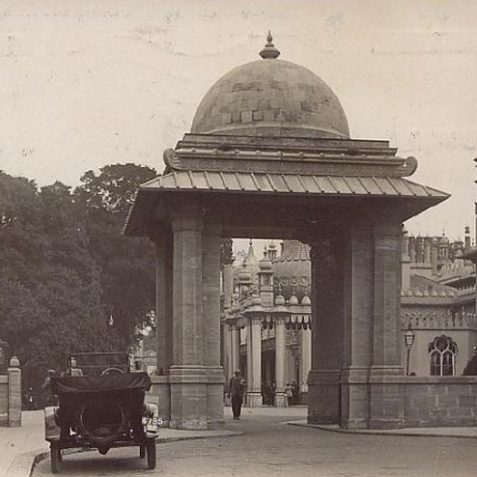 Royal Pavilion South Gate, built in 1921. It is inscribed "This gateway is the gift of India in commemoration of her sons who, stricken in the Great War, were tended in the Pavilion in 1914 and 1915." Dedicated for the people of Brighton by the Maharajah of Patiala on 26 October 1921.
From the private collection of Tony Drury 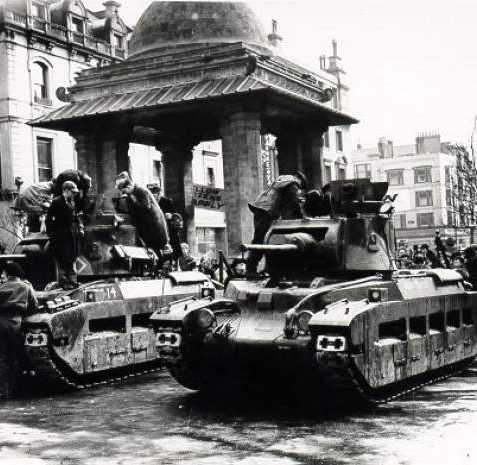 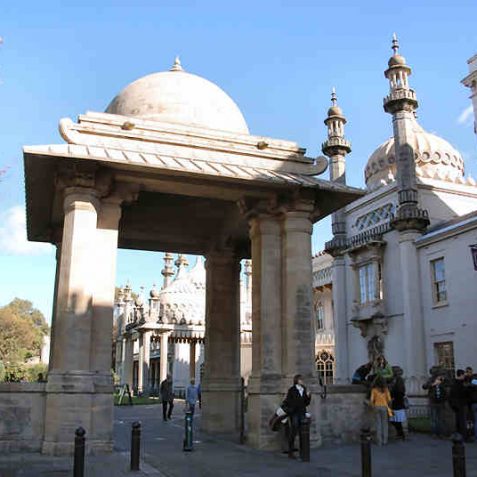 n) SOUTH GATE, Pavilion Buildings: The first formal southern entrance to the Royal Pavilion was known as the South Lodge and was completed for William IV on 7 May 1831. Built in line with the other buildings of North Street , it was a scalloped Indian archway topped by oriental towers and was designed by Joseph Good. Following the estate purchase in 1851 the South Lodge was demolished by the town commissioners along with some other outbuildings for the erection of Pavilion Buildings, and was replaced by a new South Gate on the present site, topped by concave pagoda domes and with two large, iron gates flanked by small square archways through which pedestrians passed.
The present Indian archway stands thirty-seven feet tall and was designed by Thomas Tyrwhitt in Gujerati style with a simple dome mounted on four stone pillars. It bears the following inscription: ‘This gateway is the gift of India in commemoration of her sons who, stricken in the Great War, were tended in the Pavilion in 1914 and 1915’. It was dedicated for the use of the inhabitants of Brighton by His Highness the Maharajah of Patiala on 26 October 1921.