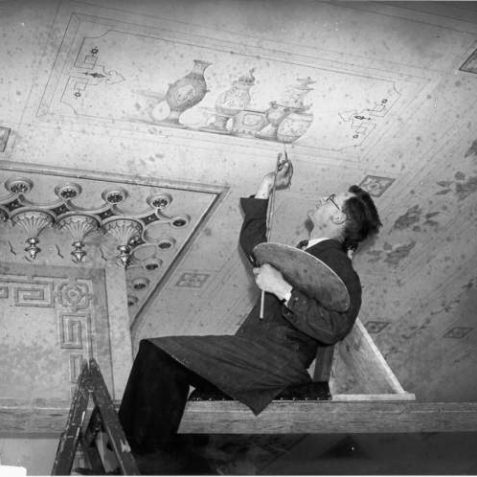 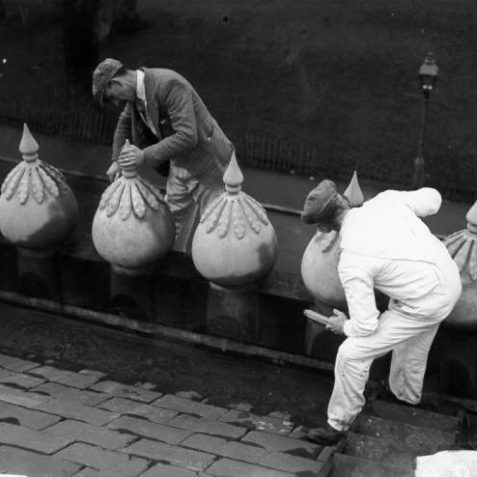 Cleaning Minarets on Pavilion Roof, c. 1930: Men cleaning stone minarets with brushes on the roof of the Royal Pavilion.
Image reproduced with kind permission from Brighton and Hove in Pictures by Brighton and Hove City Council 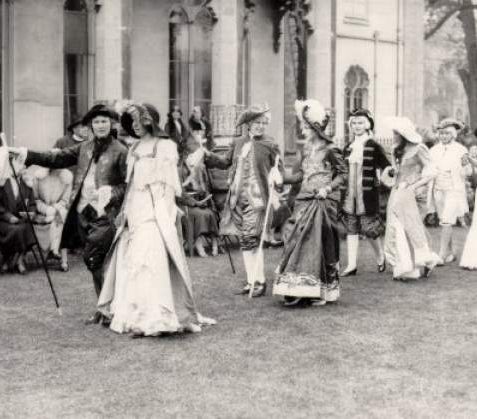 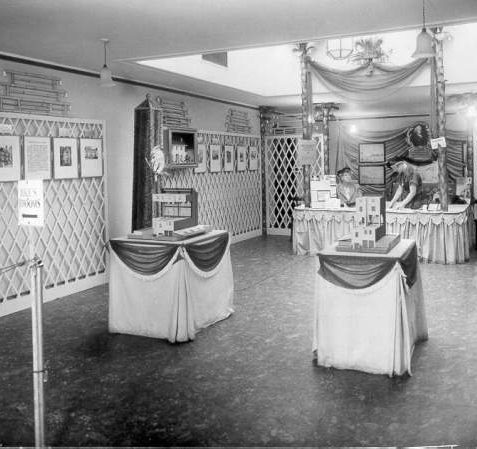 f) RESTORATION and REGENCY EXHIBITIONS: The buildings inevitably suffered during the war and a programme of restoration began in October 1920. In that year, and at several other times during his reign, King George V returned some of the original fittings from Windsor Castle. The first Regency Exhibition, to display the interior in its fully-furnished glory, was organised in 1946 by a private committee; original furniture was temporarily loaned by George VI from Buckingham Palace and other period pieces were exhibited. In 1948 a second Regency Exhibition was organised, and a twenty-year series of restorations were commenced under the direction of Clifford Musgrave. In October 1949 the council restricted the use of the rooms to ‘appropriate’ functions only, and decided also to refurnish the state apartments permanently in their original style and to keep them open throughout the year. On 9 June 1950 the Duke and Duchess of Devonshire opened the Royal Pavilion in its new state, although it attracted only a few thousand visitors initially.
A special Centenary Exhibition was held in 1950 to commemorate the town’s purchase, and more Regency Exhibitions were held in 1951 and 1952. From 1954 they were continued on an annual basis by the corporation. Queen Elizabeth II returned over one hundred pieces of the original Chinese-style furniture in 1955, and many more in the following years. These returns were so successful that by the late 1960s it was indeed possible to furnish the Royal Pavilion throughout the year.
The music-room, described as ‘the most beautiful room in Europe’, was severely damaged by an arsonist on 2 November 1975, but reopened in January 1986 after a complete restoration. Indeed, a programme of restoration on the whole building commenced in 1982 and will continue until 1991 at a cost estimated to be in the region of £10 million. However, the music-room was considerably damaged once again, by a falling minaret during the storm of 16 October 1987 .