You are here: HomenextPeoplenextSchools, Schoolchildren, and Youth GroupsnextSylvan Mount School 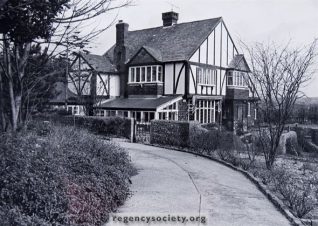 I lived in Woodingdean throughout the 60s. I started my school life at the age of four at Sylvan Mount School, but then moved onto ‘We Can Peel Spuds’ School when it closed. Sylvan Mount was quite an amazing experience. Ruby Jenner, the owner and only teacher, insisted on being called “Madame”. She was elderly and had an even older husband who used to shuffle about in the background as it was also their home. She used to dry her long bloomers and her washing in front of the school coal fire that heated the chilly room in the winter.

We used to have to wear navy berets and blazers and in the summer panama hats. I learnt beautiful copperplate handwriting from the age of 4, which later Mrs Novaski at Woodingdean Primary told me off for, and insisted I start again using horrible single print letters. Madame used to give us Art lessons with really old stencils, I remember being so happy painting and my achievements. My parents were also amazed at the facts I learnt there, as the babies were at the front listening into the 10 and 11 year olds’ lessons at the back of the class.

We used to play bumper cars with our arms folded in the playground and be indulged with picking and making daisy chains in the summer on Madame’s front lawn looking out to Ovingdean and the sea beyond. At the end of the school day the younger children used to have ten small wooden blocks which we used to have to turn down, one by one to the tune of ‘Ten Green Bottles’ which we sang. We then had to put our chairs on the desks and salute “Madame”.

Going to the pantomime

At Christmas, Madame used to make jellies a few days before the party and they would have dust from the classroom on them. She would order taxis and take the whole school into Brighton to see a pantomime at the Hippodrome in Middle Street. I think I was only at the school for 3 years and I too felt the wrath of Madame, I had my hair pulled so hard that handfuls of hair came out, had my knuckles wrapped with a ruler and oil poured in my ears in the winter without my parents’ consent.

I remember witnessing the older children having more severe punishments than me. Madame, I guess, got too old and moved to Peacehaven. The school, which was actually an old bungalow with outside toilets, was demolished. A new family, the Holdens I think, had a swish new house built there. I also remember breaking into the grounds of Warren House and playing in the sunken terraced gardens, and the chauffeur that drove a metallic silver blue car with a peaked cap who lived there.