VE day and beyond 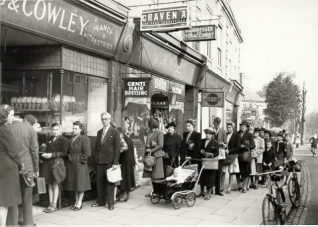 zoom
Photo: Often people would join a queue not even knowing what it was for!
Image reproduced with permission from Brighton History Centre 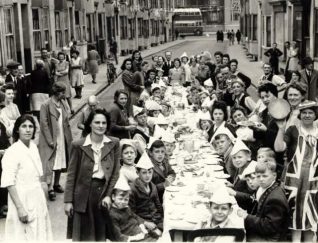 zoom
Photo of a Brighton street party - do you know anyone in this photo? Email jennifer@mybrightonandhove.org.uk
Image reproduced with permission from Brighton History Centre

War came, along with a lot of restrictions. No more beach and instead we had blackout curtains, so lights were on all the time at night, and rationing. The people muddled through and mostly helped each other out. If the butcher had any sausages (off ration) or other titbits word soon got around and a queue soon formed. The same applied to other things as well, like coal (we were allowed 14 or 28lbs each) to stop hoarding.

German planes and our gas masks
The war struck in our district with a bit of machine gunning by Germans going back to their base. A lot were shot down over the sea. Some didn’t make it, like the plane brought down about 200 yards away from our house in St Nicholas’ Churchyard. The pilot from that plane is buried in Bear Road Cemetery. At this time we had to go to an A.R.P station at the top of Gloucester Road to be fitted for gas masks. These had to be carried at all times in a little cardboard box around our shoulders. Sometimes there were spot checks to see if we were carrying them as the boxes were often used to carry other things. In school we sometimes had to do lessons in them, to get used to wearing them.

VE day
On VE day the war in Europe was over. People went wild, laughing, singing and dancing in the streets and public places. I spent that night up till about 11 o’clock, sitting up a lamp post outside the Quadrant pub at the Clock Tower. My brother had put me up there out of the way so that I could see what was going on.

Getting into the cinema
After VE day people got more light-hearted, even though the queues were still there. In fact some rationing stayed well into the Fifties. In those days when you had the money, you could go to the cinema. A lot of the films were about war and heroics, therefore they were “A” certificated, which meant you had to be over 16 to go in on your own. I used to ask people to take me in, after I had paid them my money. Usually they would, all it meant was we had to sit with them. I don’t think this could happen these days because of the threat of being molested.

Dismantling the war
All the servicemen from all nations suddenly left our town and things slowly began to get back as they had been. The army took away their BOFAR guns, which were all along the seafront. The beaches were cleared of mines and the barbed wire on posts was taken down. On the seafront the only thing that remained of the war were the gaps in each of the piers. These had been made in case of invasion so that the enemy would not be able to use them to unload supplies. About 5 months later, the atom bomb was used, and despite the horror of the pictures seen in the cinemas, it brought about a speedy end to the war.