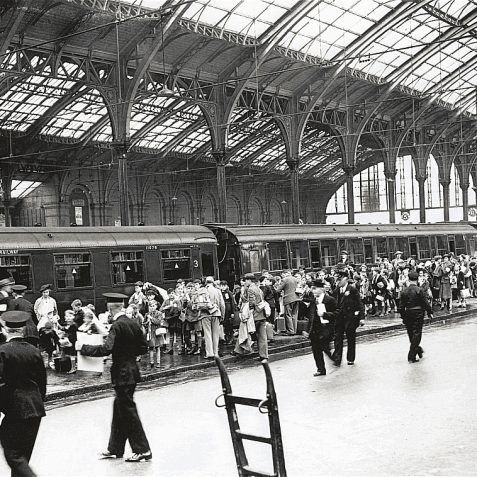 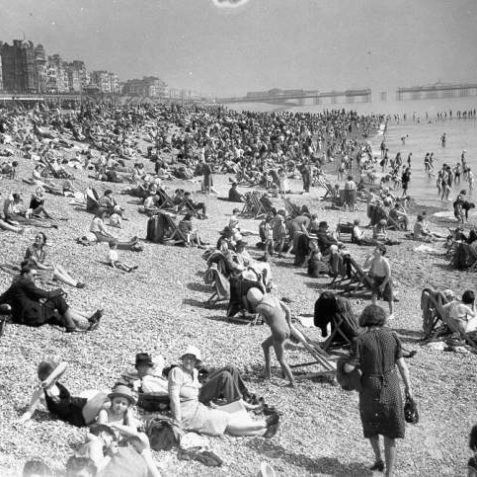 Brighton beach, packed with holiday makers during the spring of 1940, the beach was closed to the public in June 140 when work on anti-invasion defences began. Palace Pier can be seen in the background, a section of the walkway has already been removed to prevent the pier being used to land troops; the beach was soon blocked with obstacles and mines as part of the anti-invasion defences.
Image reproduced with kind permission from Brighton and Hove in Pictures by Brighton and Hove City Council 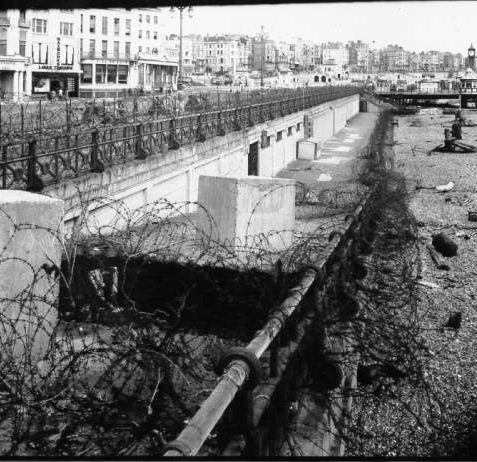 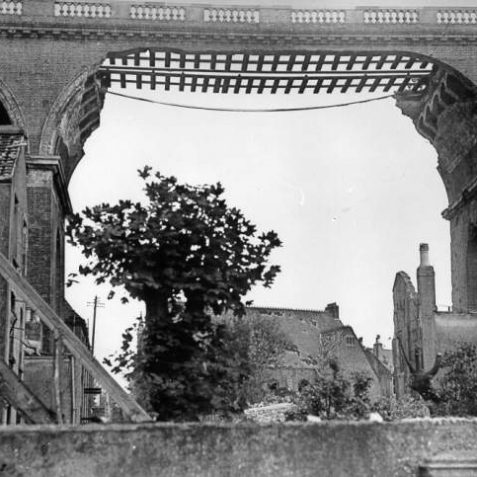 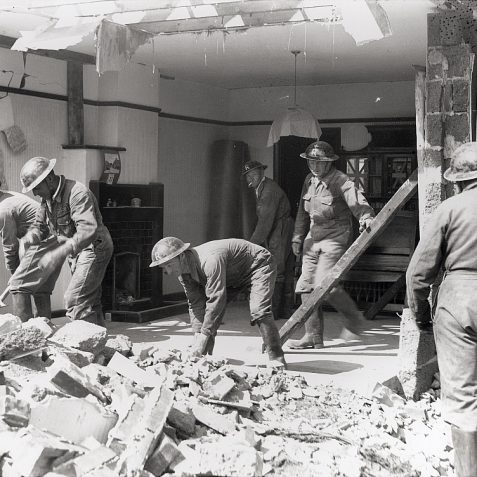 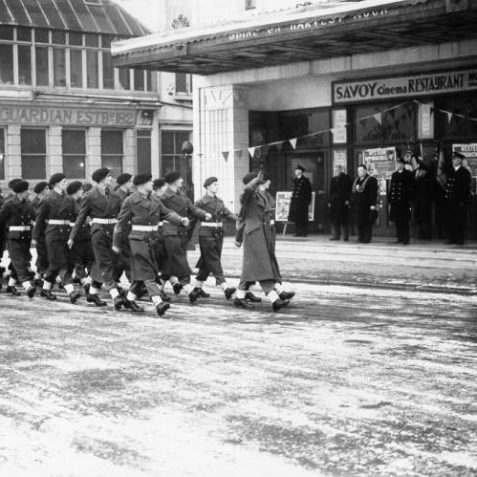 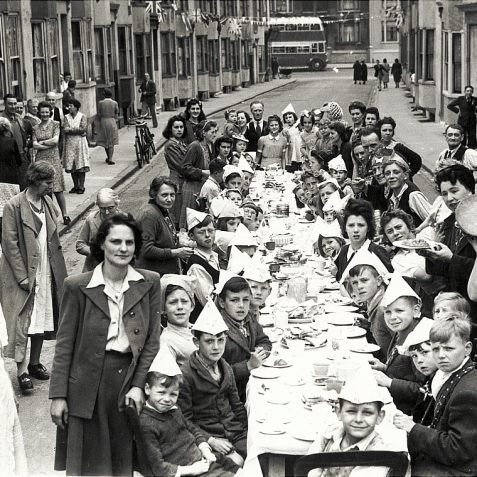 b) SECOND WORLD WAR: The war of 1939-45 had a much greater effect on Brighton than that of 1914-18, and air-raid precautions began before war was declared on 3 September; a general blackout was enforced over the south of England in August 1939 and shelters were dug in school playgrounds and parks. Brighton’s art and museum treasures were removed to the safety of the countryside. In an uneasy initial period all entertainments were stopped for a couple of weeks but were later allowed to continue with suitable precautions taken. Anti-aircraft guns and searchlights were set up along the sea-front, but there was no sign at Brighton of the impending ‘Battle of Britain’ until 10 May 1940 when a badly shot-up sea-plane made a forced landing on the beach. With the threat of a German invasion looming, the beaches were closed at 5 p.m. on 2 July 1940, and were duly mined and guarded with barbed-wire; the two piers had sections demolished to prevent their use as enemy landing stages. Brighton was declared to be no longer a ‘safe area’ and the 30,000 evacuees in the town were then re-evacuated to other areas, together with local children. {123}
The first raid on Brighton came on 15 July 1940 when Kemp Town was bombed, and was followed by several others that month, mainly over Whitehawk and Kemp Town. At 3.30 p.m. on 14 September 1940 twenty bombs fell on Kemp Town; four children and two adults were killed when the Odeon Cinema in St George’s Road received a direct hit and another forty-nine died in the surrounding area.
On 26 March 1941 the south coast was declared a ‘defence zone’ and no visitors were allowed into the area. That summer the whole conurbation was surrounded by barbed-wire fences in order to prevent a mass panic ‘escape’ of the population in the event of intensive bombing or invasion, thereby avoiding the resulting undermining of military operations. However, although facilities such as the Kemp Town tunnel were available on a temporary basis, an acute shortage of suitable air-raid shelters eventually persuaded the War Cabinet to allow the inhabitants to evacuate to London in such circumstances which mercifully never transpired. {123}
Daytime raids continued throughout 1941 and into 1942, and eight people were killed by German fighter-bombers in late 1942. From 17 December 1942 a 9.30 p.m. bus curfew was operated except for night workers, but the following day Rottingdean was hit and the Steyning Road vicarage was destroyed. A direct hit on the Black Rock gas-works resulted in a 300-foot orange flame. The heaviest raid occurred on 25 May 1943 when the town was dive-bombed by German fighters. Twenty-four people were killed and fifty-one seriously injured as the planes strafed pedestrians in the streets, and the London Road viaduct was seriously damaged. In a night raid in September 1943 thousands of incendiary bombs were dropped, destroying part of the railway works and a gas main in London Road. Another raid saw bombs fall in the Pavilion grounds, shaking the Dome walls out of the vertical, but the crater was put to use as a static water tank.
With the course of the war swinging in the Allies’ favour the ban on visitors was lifted by 1943, but was reimposed in August and September 1943 and prior to D-Day, 6 June 1944. The last raid on the town was on 22 March 1944, but from 1939 until 1945 Brighton suffered from 1,058 siren warnings; 685 local alarms and 56 actual raids; 381 high explosive bombs were dropped along with numerous incendiary bombs; 198 people were killed, 357 seriously injured and 433 slightly injured; over 200 houses were destroyed, 894 seriously damaged and 14,232 slightly damaged. The worst hit areas were Albion Hill; the area between Carlton Hill and Edward Street; Essex, Hereford and Montague Streets; the Chichester Place area; Bennett Road and Rugby Place; and Preston village. Fortunately, few of the architecturally distinguished buildings were destroyed, these being three houses in Park Crescent, three in the upper part of Chichester Place and two in Norfolk Square.
Brighton greeted Victory in Europe Day, 8 May 1945, with great celebration. The mayor read a proclamation of victory from the Town Hall balcony to a large and enthusiastic crowd, bonfires were lit on the Downs and beaches, and street parties were held all over the town. Further celebrations were held on Victory in Japan Day, 15 August 1945.
{2,242-244}