Rationing and the Morrison shelter

During the war there was rationing on most things. We had ration coupons to buy certain things with, some for clothes, some for food etc, and we had a sweet ration, I used to dream of when the war was finished I would go into a sweet shop and buy everything I wanted, a huge bag full, up to now I have not done that. There were other certain restrictions, like pregnant women and children only, could have oranges. Because we had a restricted diet, and did not get  a good amount of vitamins, my Mum gave us ‘Cod Liver Oil and Malt’. We had a spoonful every day; it was like thick treacle and I hated it.

At night when the air raid sounded we had to get up and go a couple of streets away to take shelter; I remember it being downstairs but have no recollection of where exactly it was. People would take blankets and other things to make them comfortable. We also took our food and drinks and we ate down there. The shelter became somewhere that you made friends as more or less the same people went down there, and we were all’ in the same boat’. 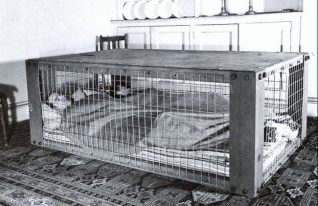 A Morrison shelter, used extensively in WWII and named after the then Home Secretary, Herbert Morrison

I went to Middle Street School, opposite the Hippodrome Theatre, and when the air raid siren sounded we all had to walk across to the theatre and into their basement. When we had to walk across the road, we had to be silent, and go class by class; school was strict in those days. The teachers took school work down with them so we still did our lessons. I often wondered if a bomb would drop would we be killed or injured. Of course we had to carry our gas masks everywhere, which was a real nuisance. At school we had gas mask drill and we kids use to make funny noises through them and then laugh.

As where we lived at the time was a lane and was all shops, there was no space for recreation for my sisters and me; so we would play games like hop scotch and skip rope with the three other children who lived along the lane. Eventually  we moved to a house in Hove and we had a Morrison shelter in the lounge. This was made of very heavy steel and wire. Like most people we put a cloth on it and used it as a table. There was only room for my sisters to sleep in it, so after a while we went to bed as usual and went to the shelter if there was an air raid warning.