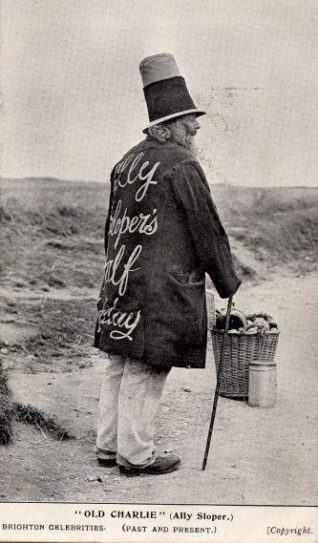 zoom
Old Charlie
From the private collection of Jennifer Drury

During the early 1900s Fenwick’s Library of 128, Western Road, Hove, offered a series of six reproduction postcards depicting Brighton Celebrities, Past and Present. One of the most fascinating characters depicted was ‘Old Charlie’, his coat emblazoned with an advertisement for ‘Ally Sloper’s Half Holiday’. ‘Old Charlie’ was in reality Juiseppe (also known as Joe or Joseph) Rivera, an Italian by birth who had reportedly come to England at the age of 12.

Like many Italian immigrants to Brighton, he had previously been a street musician, attracting large crowds in Madeira Drive, where he played an organ with dancing dolls along its top. Many of his spectators were children, who, if they became cheeky, he would frighten off by removing his tall hat and shaking his unkempt mass of grey wiry hair at them.

In later life his pitch was located “on the roadside opposite the reservoir at the copse, on the way to the Dyke”, where he sold oranges, sweets and matches from a wicker basket. The advert for ‘Ally Sloper’s half holiday’ refers to a comic magazine of that name, published from 1884 until 1916, based upon Charles Ross’s earlier cartoon character, ‘Ally (Alexander) Sloper’. It is reputed that Charlie Chaplin based his “Little Tramp” character upon him. Old Charlie lived at 17, John Street during the early 20th century and died penniless in the infirmary on 17th August 1915, at the age of 75.