Rottingdean Windmill stands to the west of the village on Beacon Hill, approached from Marine Drive, and is also known as the Beacon Mill. This famous smock-mill, which is said to have been used by smugglers for signalling, was erected in 1802 and continued grinding corn until 1881, but it then fell into disrepair before being renovated in 1905-6 by the Marquess of Abergavenny. 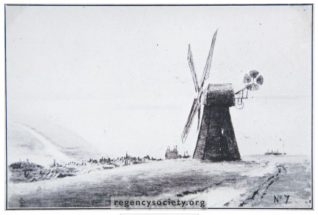 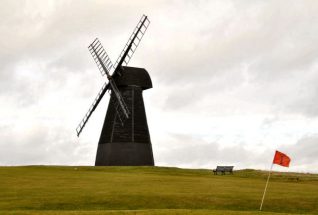 Site of a 16th century beacon

The octagonal mill, which is weather-boarded above a stone base, has become world-famous through the stylised silhouette of Sir William Nicholson and is now the trademark of publishers William Heinemann. Beacon Hill itself reaches 216 feet above sea-level and was the site of a warning beacon, one of a coastal chain established by Henry VIII. There are also several archaeological sites on its slopes. In digging the foundations for the windmill in 1802 the skeleton of a warrior was found, bearing a sword which was later stolen. 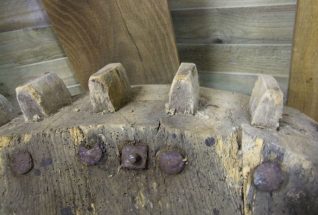 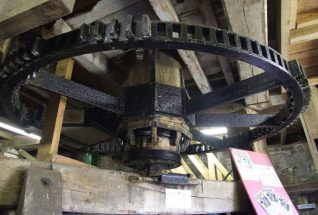 The great spur wheel on the ground floor of the Rottingdean windmill. The millstones on the floor above are driven from here.

In the early years of the millennium, it was decided that the strong south westerly winds had taken their toll on the windmill’s sweeps and stocks, and that they were in need of replacement. The Rottingdean Preservation Society made a successful bid to the Heritage Lottery Fund and received a grant for £41,800 towards the work. In acknowledgement of the Heritage Lottery Fund support the Windmill is open to the public on special days and details can be found on the Rottingdean Preservation Society website.