The Corn Exchange was built in 1803-8 by William Porden. It was erected for the Prince of Wales (later George IV) as a riding school, and forms the western wing of the Prince’s stables now known as the Dome. After WWI it became an exhibition and function room, and in 1934, alterations in the Art Deco style were made by Robert Atkinson at a cost of £34,000. At the same time, the Pavilion Theatre was erected in New Road as a supper room for the Corn Exchange with a kitchen below.

Converted to theatre in 1934

The theatre stands on the site of a corporation yard which was once derelict stabling erected in 1806 for Mrs Fitzherbert, the Prince of Wales’ mistress/wife. The Pavilion Theatre is of grey brick in Flemish bond with stone dressings. It is a stylised version of Islamic architectural forms with tower like bays and a lotus parapet. When the building was converted to a theatre in 1934, the adjacent early 19th century house was converted into a box office; it is included in the Grade II listing. 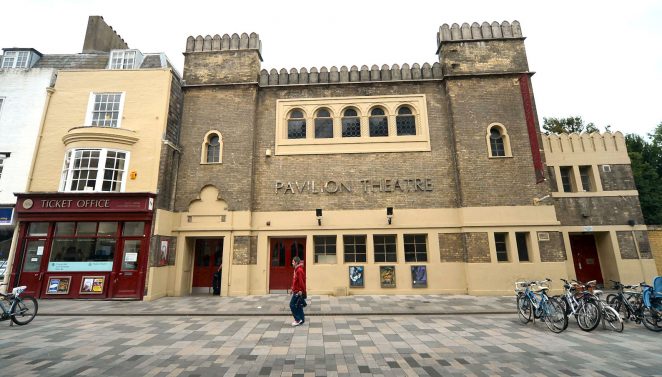 ‘The ivy-clad Dome Cottage as it once stood in New Road. This picturesque cottage with creeper-covered walls was once part of Regency Brighton and the historic home of Miss Annie Brown, who now lives in Grand Avenue, Hove. Originally the coachman’s cottage adjoining the Prince Regent’s private stables in the Royal Pavilion grounds, it stood on the present site of the Pavilion Theatre in New Road and was known as the Dome Cottage until it was pulled down in 1932. Miss Brown lived there with her parents for more than forty years while her father, Mr F. W. Brown, was works supervisor of the Pavilion Estate. She well remembers, at the age of seven, playing in the courtyard, which is now part of the theatre. This photograph shows Miss Brown’s parents at the cottage door. During the First World War it was always open to patients from the emergency hospital set up in the Dome and the Corn Exchange, and Miss Brown’s memories include many visitors from the Indian fighting contingent whom she helped to entertain.’ 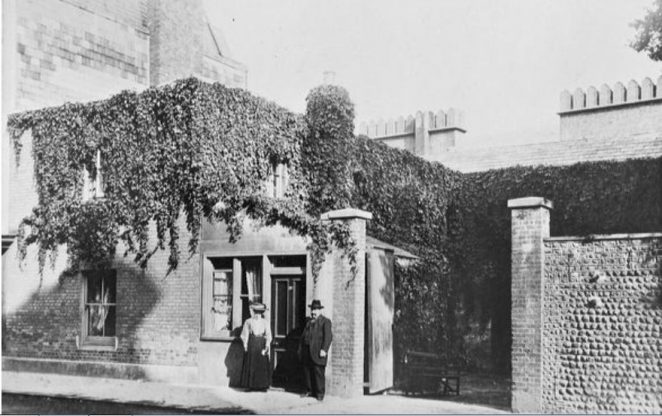 Mr F. W. Brown, works supervisor of the Pavilion Estate, with his wife outside The Dome Cottage 1900