The western 1841 extension to St Nicholas’ churchyard is entered through a listed archway on the western side of Dyke Road, and was laid out by Amon Henry Wilds in that year. It came under the control of the corporation following the 1884 Improvement Act and is now known as The Rest Garden. Gravestones which were moved by the council in a clearance of the area in the 1940s line the walls; a pathway runs around some large Victorian tombs which were too big to move. The burial vaults, which are Grade II listed, form a terrace on the north side of the graveyard. 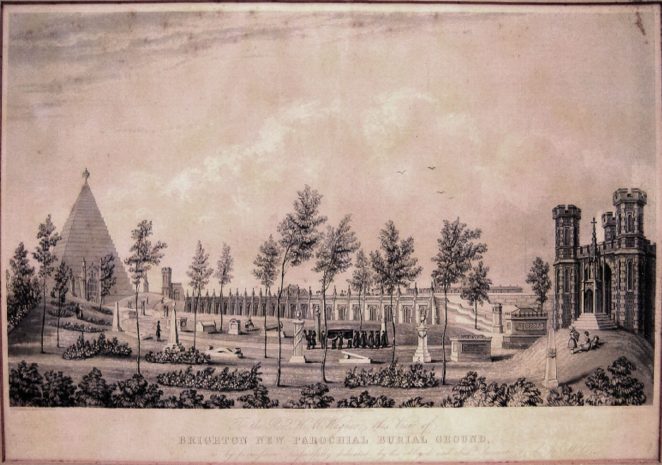 Artist’s impression of AH Wilds’ original plan for the area

Amon Henry Wilds originally had a very grand notion for this area. His original plan included a burial pyramid with room for several thousand coffins, a row of twenty-three burial vaults, and a castellated gatehouse; eventually only fourteen burial vaults were built. In fact the 1841 extension was only in use for just over a decade, because in 1854 public health legislation prevented further burials at St Nicholas and many other churchyards. This legislation was intended to help prevent the spread of cholera and other contagious diseases. 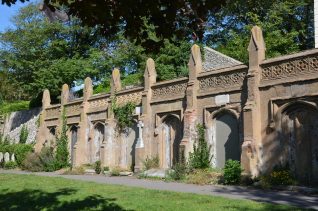 Burial vaults in the Rest Garden 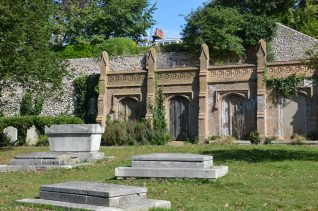 Vault number thirteen – second from left – has a real door

The burial vaults themselves are constructed of random rubble and stucco. The range of vaults is fronted to the south by fourteen bays designed in a Tudor-Gothic style, as if they were entrances to the vaults. In fact the south walls are blank, and faced in stucco with Tudor-arched ‘entrances’ having studded ‘doors’ and figural labels which are now mostly defaced. Only the second door from the west is of wood, and real. There are buttresses between each bay with three offsets terminating in pinnacles. The vaults are topped by a parapet decorated with quatrefoil decoration.

Have you seen the section on St Nicholas’ Rest Garden?