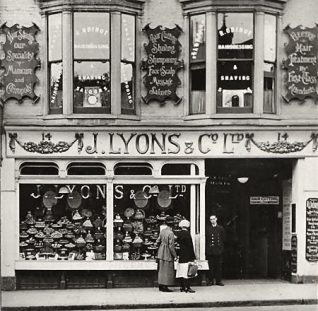 zoom
Undated photograph of J. Lyons & Co's tea room at 14 North Street, Brighton. The company's tea rooms were hugely popular. They were also known for the care taken in the design and decoration of their shops. In spite of its success throughout much of the century, Lyons & Co's fortunes declined in the late 1960s. By the early 1980s, the company had been broken up and sold to various buyers.
Royal Pavilion and Museums Brighton and Hove

In the 1950s, Brighton had two Lyon’s tea shops; one on the corner at the bottom of St James’s Street – a real ‘Lyon’s Corner House’ – and the other in North Street. Lyon’s tea shops were instantly recognisable by their art deco frontages. The shops were always painted in white, with gold lettering across the top of the window. They were typically fairly huge, inside, with rows of formica topped tables. My mother often took me to the Lyons tea shop in North Street when I was young. I always had the same things: a raspberry milkshake and a dish of jelly with artificial cream. It always felt like a luxury. Jelly was associated with parties – although I never went to many.

As I remember, they were always busy. In those days, almost everyone smoked. The cafe must have been full of smoke from pipes and cigarettes. We did not notice it at the time, of course, as this was the norm. Lyon’s coffee came in two versions: the small cup or the large one. Once we stood behind a man who performed an odd experiment. He asked for a small coffee and a large cup. He poured the contents of the small cup into the large. The ‘small’ coffee filled the large cup. Thus there was only really one sized cup of coffee. It was just the shape of the cups that seemed to make a difference. He must have rehearsed this. Whether or not Lyon’s had a rethink about their cups, remains a mystery. But I was very impressed.