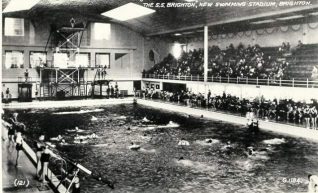 zoom
Photograph of the S.S. Brighton swimming stadium in West Street in 1934 before its conversion to an ice-rink. It was opened by Earl Howe and one of the first people to dive from the high board was Johnnie Weismuller of "Tarzan" fame.
Reproduced courtesy of Royal Pavilion, Libraries & Museums, Brighton & Hove 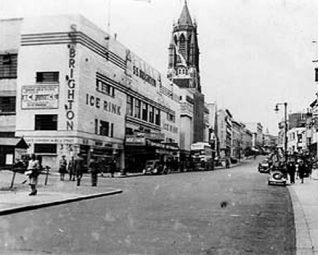 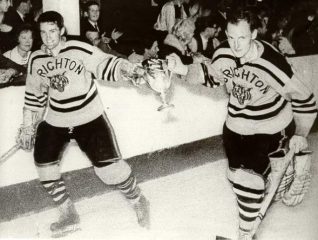 e) SPORTS STADIUM or S.S.BRIGHTON: This popular centre was opened by Commodore Earl Howe on 29 June 1934 as the S.S. Brighton swimming-pool, a square building faced with cream tiles which was erected at the corner of Russell Road on the site of many small tenements and other buildings at a cost of £80,000. The interior was decorated in the style of an ocean liner (hence S.S.) and housed the largest covered sea-water swimming-pool in the world, 165 feet long by 60 feet wide. Swimming championships and bathing-beauty contests were held, but after only one year the pool was converted into an ice-skating rink, reopening on 16 October 1935 as the Brighton Sports Stadium but still also known as S.S. Brighton.
The first of the many ice-shows opened on New Year’s Eve 1936 and was followed in the summer by a sensational show called Marina. After the war many other attractions were staged including judo, wrestling, basketball and professional tennis, but in September 1959 the stadium was relaunched as the Brighton Palladium, staging Sunday variety shows, musical concerts and party political conferences as well as sporting events. After a takeover by Top Rank in February 1962 though, the building reverted to its original name.
Top Rank threw their investment into a new, adjacent entertainment centre (Kingswest Boulevard) however, and the Sports Stadium was closed in October 1965 and subsequently demolished. The site was originally intended for a restaurant, car-park and cinema extension to the Top Rank Centre, but it remained vacant until 1990 when construction of the Oak Hotel commenced. One of the town’s most popular entertainments for over thirty years has yet to be adequately replaced, however. {3,115,123}
The Sports Stadium was also famous as the home of the Brighton Tigers ice-hockey team. Formed in 1935, they played to packed crowds after the war under the management and coaching of star player Bobby Lee, and won the British League in seasons 1946-7, 1947-8 and 1957-8, and the Autumn Cup in 1946-7, 1950-1, 1956-7 and 1958-9. In December 1957 the Soviet Union national team were beaten 6-3. When the post-war boom subsided the star Canadian players left and the club went into intermediate-grade hockey in 1960, although attendances actually rose. However, the Tigers were doomed as Top Rank refused them a lease on the new ice-rink next door, and they played their final home match on 23 May 1965; the team then continued to play away matches only until 1967. {19,123,302}
Any numerical cross-references in the text above refer to resources in the Sources and Bibliography section of the Encyclopaedia of Brighton by Tim Carder.