The starlings - a spectular ritual 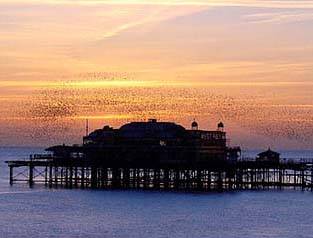 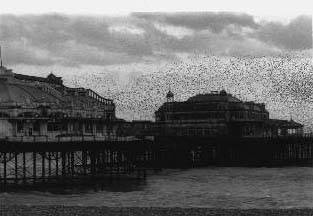 “One of the things that I love about living here is being able to watch the starlings flying above the West Pier just before sundown. I often walk along the seafront late in the afternoon and just stop and sit on the pebbles to enjoy the spectacle. Really, I’ve never seen anything like it. The contrast between the elaborate, derelict pier, the open sky, and the immense, pulsing mass of tiny birds is absolutely breathtaking. Sometimes as I watch it starts to look like a huge dot-animation projection or perhaps something like the patterns you get when moving metallic dust around with magnets. I’ve always found that it’s an enjoyable way to relax my mind and wind down at the end of the day.”

by Jenny Ridland, My Brighton and Hove volunteer, 2001

“This decaying relic stands as a symbol of Brighton’s decadent past, in striking contrast to the kitsch modern version that mirrors it a few hundred meters east. This alone merits its place as a prime sight of Brighton, but there is more…. at dusk it hosts a spectacular ritual. Literally hundreds of resident birds spend the sunset hour conducting a display of formation flight of collective consciousness, creating a kind of wonderful sight that is both inspiring and relaxing. For the best view, head to the Gemini bar and enjoy the show over an evening pint.”