You are here: HomenextTopicsnextViews of the city: images & opinionsnextMystery photos of Brighton and HovenextJames Gray's Nevill Avenue mystery photo:Part II 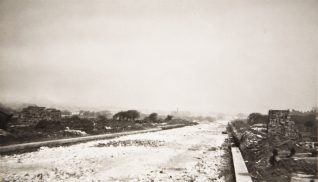 zoom
Nevill Avenue under construction in 1933?
Image reproduced with kind permission of The Regency Society and The James Gray Collection 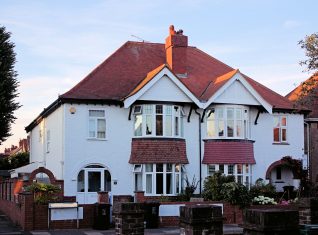 zoom
The houses in the distance in the 1933 photo above.
Alan Hobden 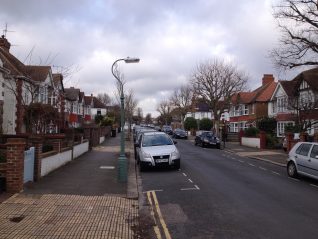 Still ruminating on the problem

By 12 February 2018, and unable to keep this mystery out of my mind, I was thinking this photo might have been taken in the area between New Church Road and Portland Road, but the only suitable semis on Streetview were on the north side of Lawrence Road, and even they seemed to be in the wrong position.

A breakthrough came on 16 February, when I was driving up to play golf at the Dyke, and noticed that the trees on the north side of the Devil’s Dyke Road had been bent by the west-south-westerly wind in the same way as those in the old photo. This meant that the original photographer had been looking northwards, so Nevill Avenue was definitely out, as it runs from east to west.

After further research, I discovered that Hogarth Road had been developed after Lawrence Road, so the pair of houses I had in mind, 61 and 63 Lawrence Road, would have stood without anything else on their west side for some time. Kevin Wilsher helpfully told me there had been a brickfield in that area, so there would probably have been a chimney for the brickworks building. A quick look at the Ordnance Survey website confirmed the chimney was in the right position for our photo. (It was situated roughly where St Heliers Avenue now meets Amesbury Crescent.)

A problem of perspective

I went down to Lawrence Road and found Nos 61 and 63, which stand at the western end of the road, next to Hogarth Road. They met all the criteria of the houses in the photo except the side chimneys, but a tell-tale patching of tiles on the side roof of No 63 showed that a side chimney had probably been removed. Some of the adjacent matching houses still have theirs. I had another problem though because, even standing at the most southerly point in Hogarth Road, close to the junction with New Church Road, the pair of semis in Lawrence Road looked far too close when compared to the originals.

A clue from a church

I took the present-day photo from Braemore Road on 18 February 2018, slightly to the left of the original position in order to avoid the trees, and bring the white-painted 63 Lawrence Road house into the shot in the distance, behind the 30mph speed limit sign. The piles of bricks on both sides of Braemore Road under construction in the old photo have, for over eighty years, been incorporated into the houses in that road, but I have no idea which ones!

Eighty five years after it was taken, the mystery has been solved. It is just a shame that Mr Gray is no longer with us to share the discovery of the true location, the east kerb line of Braemore Road, Hove, looking northwards during its construction in 1933.

Mystery photos of Brighton and Hove (158)